Why trust anyone else with your health?

Unlike conventional medicine, which focuses on attempting to treat disease once it occurs, Dr. Cianci emphasizes improving your health in an effort to reduce the risk of pain and illness in the first place. Most people would rather be healthy and avoid illness, if they could. This is one of the main reasons for the big surge in the popularity of our wellness center.

Dr. Christopher G. Cianci, ACBSP, is the founder of Total Body Rehab and has been a leader in the chiropractic field for more than 20 years.  A graduate of Western States Chiropractic College in Portland, Oregon, he established his practice in Montgomery County, PA. Dr. Cianci has a broad range of training that includes, chiropractic, rehabilitation, sports medicine and nutrition.

Dr. Cianci is a Certified Chiropractic Sports Physician and received his certification in 2007 by the American Chiropractic Board of Sports Physicians. This national accreditation is shared by a minority of all licensed Chiropractors and it makes him a specialist in the treatment and rehabilitation of athletic injuries. He is also one of the first chiropractors to be certified in Athletic TIPS, designed for amateur athletes K-12 through college.  Also, Dr. Cianci is certified in TRX Sports Rehab Suspension. Dr. Cianci is working toward a Diplomate in Spinal Rehabilitation. Currently, he has a successful practice in Lansdale, PA.

Christopher Cianci, DC is has served his profession as as District 7 Director for 7 years and served as the the Treasurer for the Pennsylvania Chiropractic Association until 2012. Dr. Cianci is also member of the National Chiropractic Council and the American Board of Chiropractic Sports Physicians.

Dr. Cianci is actively involved in his community and he donates his time and talent to various charitable organizations including being President of Shake it Off (a non-profit to benefit Parkinson's Disease research), Manna on Main and Christmas for Kencrest children. He proudly sponsors a girls' basketball team for the Towamencin Youth Association and in his spare time he enjoys biking, swimming and exercise in various forms.

In December 2008 he met the love of his life and on June 26, 2010 they married. He is now the proud husband to his wife Jodi and stepfather to her beautiful daughter Kaitlin.  Dr. Cianci personally enjoys cycling, swimming, running and many other outdoor activities. 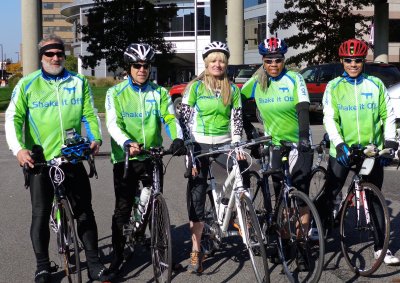 Dr. Cianci (right) road his bike 520 miles from the Cleveland Clinic Hospital, Ohio to the suburbs of Philadelphia to raise funds and     awareness for Parkinson's disease.

Find us on the map